How does Beverage Distribution work in China? Read our article that covers the China Distribution model.
Favorite 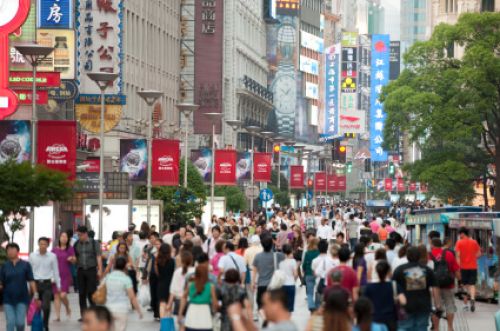 Consumption can be divided into three categories: megastores, nightlife (including Western restaurants), and domestic retailers.

While megastores account for 70% of the distribution customer base, there is still a large percentage of the market dedicated to on-trade consumption. Of on-trade, 35% of the market demand stems from nightlife, with the remaining 65% from domestic restaurants and individually owned and operated retailers.

Even more fractured than consumption is the distribution structure. A company occupies one of three roles along the chain of distribution: producer, wholesaler, or distributor. In an efficient consolidated distribution network in a more advanced market (as represented in Figure 2), a producer would supply a wholesaler, which would in turn supply the distributor that sells directly to various retailers. In this system, the wholesalers are restricted from distributing a competitor’s product. In Figure 2, this means that if A and B are types of beer, each wholesaler can only vend one type. Distributors, however, are free to sell competing products and are able to purchase from various wholesalers without any obligation to one or the other. 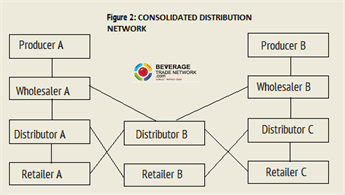 In this type of network, each distributor is contractually obligated to purchase a quota from a wholesaler, and is only free to purchase from other wholesalers as long as that quota is met. Likewise, retailers have an obligation to only a limited number of distributors in order to ensure the consistency of a customer base. A consolidated distribution chain, which is not much different from operations in the United States and Europe consists of three tiers, four tiers at most. 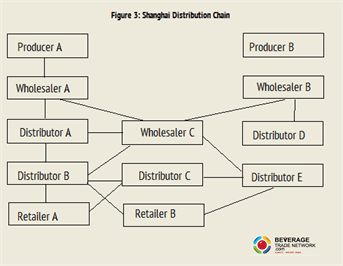 In Shanghai’s system (represented in Figure 3), however, the complex structuring of beverage distribution results in lower profit margins at every level. As evidenced above, the distribution network in China can have as many as seven tiers at any given time, with no quotas or exclusivity deals the process becomes extremely muddled. Producers A & B have exclusive agreements with wholesalers in various cities, though there is no guarantee that Wholesaler A has Producer A’s business throughout the country, rather exclusivity agreements are on a city-by-city basis.

Wholesaler C in the above diagram represents megastores such as Carrefour or Wal-Mart, which often times in lieu of their own distribution and logistics center utilize local companies’ instead. Distributors purchase goods from these wholesalers and proceed to sell beverages to retailers, however, due to the sheer number of retailers and the competitiveness of the distribution industry, market share is evenly divided among a large number of companies.
Shanghai, like many other major Chinese cities has laws in place that limit the use of trucks on city roads during daylight hours in an attempt to alleviate traffic congestion. As such, large-scale distribution is difficult, with multiple smaller trucks, vans, and even sedans used to transport beverages around the city. Distribution companies either require a fleet of smaller cars and vans or face paying exorbitant taxes and fees to use trucks.

These high transportation costs, combined with low sales margins create an ultra-competitive and fragmented industry. In addition to its inefficient structure, Shanghai’s beverage market has a skewed target consumer base, which results in restrictive pricing and prevents access to domestic vendors. Even though 65% of the retail market is made up of domestic restaurants and individual counter-shops, wholesalers and distributors base their pricing methods on the 35% consisting of nightlife and western restaurants.

The hope is that they can maintain higher pricing and sell top-shelf beverages in order to increase their profit margin. By maintaining a higher baseline price, the distributors are cutting out domestic retailers, who, in turn, either purchase beverages from megastores and convenience shops that offer lower pricing, or simply restrict their own sales to cheap, domestic substitute brands.

These higher prices are also the reason that established brands like Coca-cola struggle to seize market share in China. Although Coke was and continues to be the number one, most widely distributed beverage in China, with 95% brand recognition. 70% of its business is done through McDonald’s chain restaurants. Simply put, Coke’s unwillingness to lower its price mark up to wholesalers is in effect, significantly limiting its market. If Coke were willing to lower its prices, it would effectively double its potential market.

Pricing restrictions, combined with a lack of centralization in the domestic market makes it particularly difficult for distributors to reach the domestic mom and pop restaurants and retailers. Due to the current distribution system, even if pricing were less prohibitive, it would still require significant effort and contacts for any distributor to effectively satisfy a profitable number of domestic consumers.

- The Chinese Tmall/WeChat Model: How to Tap New Wine Distribution Models in China 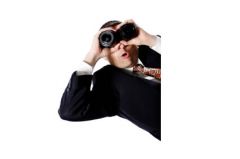 What US Importers Are Looking For & How To Keep Them Interested

Explore the evolution of the US wine market and identify new opportunities for small and medium sized brands.
Read More 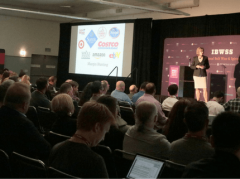 How To Develop and Deliver a Successful Bulk Wine Program 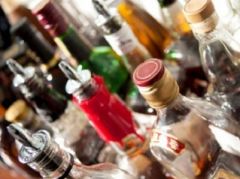 The Seven Sales For Successful Distribution 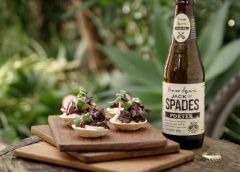 The overall beer market in Australia continues to be challenged in volume by wine and cider, with craft beer the consistent savior.
Read More 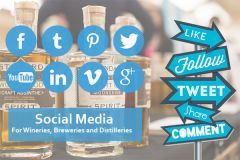 A Beginner's Guide to Social Media for Wineries, Breweries and Distilleries

How to engage with your followers and build your brand.
Read More