Winesellers, Ltd. is thrilled to announce a new addition to its French portfolio: Prosper Maufoux. Based in Santenay, in the heart of Burgundy, this world-renowned producer will have a range of six wines available nationwide this coming August.

“Prosper Maufoux is a prestigious and well recognized producer showcasing quality wines sourced from the best terroirs throughout Burgundy,” said Adam Sager, Vice President of Winesellers, Ltd. “With its rich history and its strong commitment to the region, Prosper Maufoux will make a great addition to our already strong portfolio.”

Founded in 1860, Prosper Maufoux has always aimed to preserve the unique terroir of Burgundy by sourcing grapes from prime climates and appellations in the region. The house is now owned and operated by the Piffaut family, key players in Burgundy wine production since 1898, who are also proprietors of Château de Saint-Aubin in Chassagne-Montrachet. The winemaking and cellaring is overseen by renowned oenologist Nadine Gublin. Gublin was awarded Winemaker of the Year by leading wine magazine La Revue du Vin de France, the first woman to receive the honor.

“We, my father and I, are very thrilled to re-launch the Prosper Maufoux Burgundy House in the US,” said Aurelien Piffaut. “My family has had roots Burgundy since 1898 and I am proud to hold the torch. We feel very pleased with our partnership with the talented Sager family who jumped right in with us on this journey. Despite the Burgundy shortages, we remain engaged in the demanding challenge from vineyard to vinification and continue to elevate one of the most highly regarded wines in the world. The last acquisition of the Château Saint Aubin proves our determination and commitment.”

In 1860, Prosper Maufoux, who was a notary by trade, left his practice to give his life over to his passion for wine. He set up his own firm in Santenay, a Burgundian village in the heart of the vineyards in southern Côte d’Or. His son, Cyprien, looked beyond the borders of France, taking Prosper Maufoux wines to the tables of England, The Netherlands and The United States. In 1970, his grandson, Pierre, brought Prosper Maufoux’s headquarters to the main square in Santenay. He chose an 1835 mansion house that was built by Jacques Marie Duvault-Blochet, who, at that time, was the owner of the prestigious Romanée Conti estate. This is the location and setting that the company has chosen to draw on all its skills and mature its gems from Burgundy. In 1994, Mr. Robert Fairchild, the long-time importer of Prosper Maufoux wines to The United States, took up the reins of the company, continuing until his death. The torch was then taken up by Eric Piffaut, whose family’s roots in Burgundian wine go back to 1898. New resources were put into use to perpetuate and reinforce the existing culture of high quality and develop the company’s international renown. At the winemaking helm the Piffaut family has since brought on oenologist Nadine Gublin, now overseeing the production of the house. Gublin was the first female winemaker of the year named by France’s leading wine magazine, La Revue du Vin de France.

Founded in 1978 by Yale Sager, Winesellers, Ltd. is a second generation, family-owned and globally recognized importer and marketer of fine wines to the U.S. market. The company’s portfolio represents the finest quality of wines in their respective price category and has widespread distribution in all 50 U.S. states. 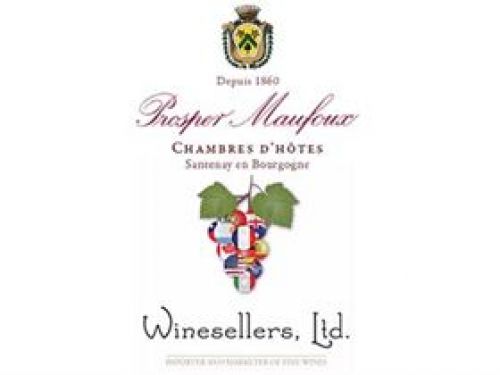