Two former pub group executives have invested in Hofmeister and they say it is on course to be one of the UK’s biggest world beer brands in the next five years.

Hofmeister was brought back to life in 2017 as premium, slow brewed, Helles lager from the forests of Bavaria. The revamped beer is a premium 5% Helles lager made in keeping with the German Reinheitsgebot beer purity brewing law.

Next month it will be introducing two new brands to its portfolio: Hofmeister Weisse, a traditional Bavarian wheat beer at 5.1% abv; and Hofmeister Ultra Low, a 0.5% abv Bavarian Helles lager made with the same local mineral water, barley and Hallertau hops.

Venters said he was particularly attracted to Hofmeister as he has spent a career helping “rejuvenate old, iconic brands” including Durex, Radox and Vaseline during his earlier career, as well as beer brands such as Fosters, Holsten Pils, Greene King IPA, Old Speckled Hen and Belhaven Best.

The pair have not just invested in the brand, but will be taking an active role in helping to develop it, with Venters focused on building Hofmeister’s brand credentials, whilst Francis lends his expertise to how it targets and grows its distribution.

Venters said: “Hofmeister already has such strong brand awareness and affection, which usually costs millions to get, and we now have the authenticity as well. We think it will be a huge success.

“I feel lucky and privileged to be part of such a positive entrepreneurial story. This is a very clever iconic brand, whose product is sourced from a brilliant Bavarian brewery, with British ingenuity bringing it all together. We can each add something and we’re having such great fun working together.”

Francis said: “There are a hundred reasons why Spencer and Richard should not have done what they did in bringing Hofmeister back. But now they have, I am absolutely delighted to be part of a team with a brand from the best beer region in the world and is 100% British owned.” 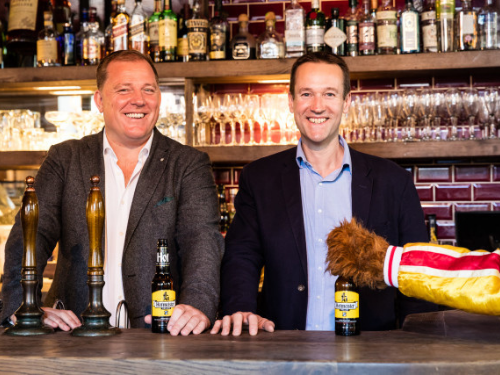