Dishoom’s retail arm has launched a collected of bottled cocktails.

The Permit Room, which is the internal bar inside every branch of the Indian restaurant chain Dishoom, has launched its first collection of bottled cocktails.

The cocktails, which are designed for at-home consumption, include the India Gimlet, Sonia’s Negroni and Permit Room Old Fashioned. The three can be ordered individually or together in a gift pack.

The drinks will be sold via The Dishoom Store, alongside gifts for the festive season and beyond, including Bacon or Vegan Sausage Naan Roll Kits and the Dishoom cookery book.

The India Gimleti s Dishoom’s take on the favoured tipple of the high seas. The gimlet was originally devised to prevent scurvy when sailors, anxious to avoid death, mixed lime cordial with their gin, so creating one of the earliest cocktails.

Sonia’s Negroni is a recreation of the famous Italian drink for the Italian-born, Indian politician. Dry citrus gin and bitter Campari are sweetened with Dishoom Chai Vermouth (macerated with cinnamon, fresh-cut ginger, cloves and vanilla), giving a more relaxed edge to the traditional robust Negroni. The drink is bottle-aged for smooth, tawny intensity and is best served over ice with a twist of orange peel. 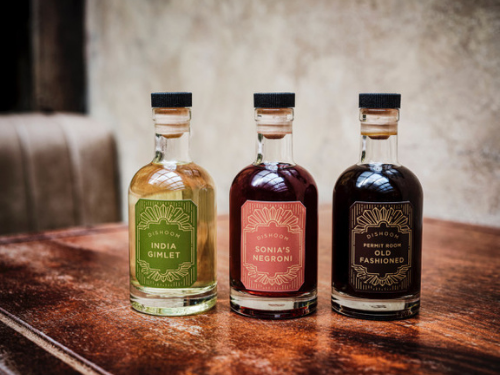