Pelican Brewing Company is revealing their 2021 beer release schedule for their 25th year, this includes when you can find various seasonals, limited releases, cans, bottles and collaborations. One of the highlights is the return of the Lone Pelican series where this year they are collaborating with past Pelican brewers who have gone on to exciting careers at various other breweries from across the country. It will also be the debut of a new format in 500ml bottles for the first time.

“Pelican has had many successes since we opened our doors, but some of the most rewarding achievements have been the innumerable fantastic people I’ve had a chance to work with.  People I’ve been honored to teach, to mentor, and to learn from.  People who have gone on to do great things elsewhere.  People I’m proud to have as Pelican alumni.  Our Lone Pelican series for 2021 celebrates and highlights some of these fabulous brewers.”

This year Pelican adds three new year-round beers to the lineup with Head Out Hefeweizen in a bottle, and Paddleback Oceanic Pale Ale and Pelican Pilsner in cans. Like all Pelican beers, these new offerings are brewed with purpose and expand their offering to meet their flock’s sense of adventure and desire to experience new craft beer styles.  The lineup is anchored by Pelican classics such as Kiwanda Cream Ale, Beak Breaker, Hazy Rock, and 2020 GABF Silver medalist Updrift IPA.

Pelican’s award-winning Barrel-Aged program continues to deliver this year featuring Father of All Tsunamis, an Imperial Stout Ale aged in Rye Whiskey Barrel, Captain of The Coast, a Wee Heavy Ale aged in Dry Fly Wheat Whiskey Barrels, and the highly coveted Mother of All Storms, an English-style Barleywine aged in Bourbon Barrels.

Pelican’s draft series features a variety of beers sure to delight any craft beer connoisseur’s desires. Pelican kicks off the year with an Imperial Red Ale – Drop Red Gorgeous a big, malty, and full-bodied without being overly bitter, followed by their annual collaboration hop blend with Pink Boots Society. Pelican ushers in the warmer months with two sure to be patio sipping favorites with Me, You Happoshu, a honey rice lager, and Peach Trip ale with peaches. Pelican ends the year with draft favorite Dark Hearted Blonde, a coffee blonde ale that is sure to wake you up during those long winter months. 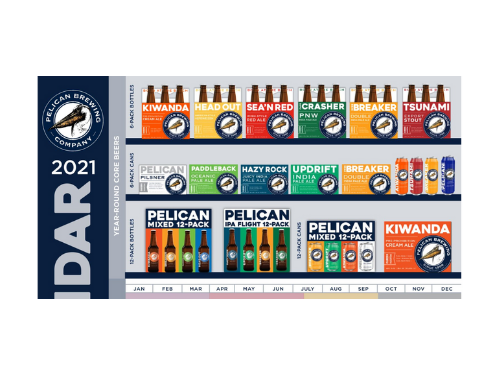