According to the Canadian beer news

2 Crows Brewing has announced the release of new beer inspired by a classic cocktail. Negroni (5.5% abv) is a blended barrel-aged sour described as follows: To make the base of Negroni we blended three different golden sour beers – one aged in a vermouth barrel for 9 months, one aged in an amaro barrel, and one from a gin barrel. After blending, we condititioned the beer on a complex combination of botanicals – fresh bitter orange peel and lemon peel, dried wormwood, calamus, fennel, sage, orris root, rosemary, cinnamon, clove, thyme, marjoram, hibiscus, juniper, and coriander – all chosen to mimic the intense herbaceous, zesty, bitter, and orangey aspects of a proper negroni. 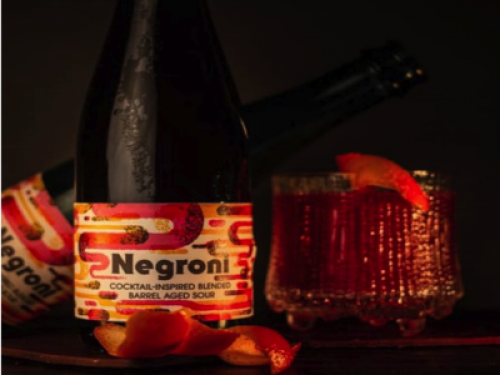