What started out as a one-off beer in 2014 has quickly become a summer highlight for many: Birdsong Brewing’s Fake Plastic Trees makes its annual debut June 20.

The popular hazy India Pale Ale has a light, mellow base with Sorachi Ace, Cascade and Comet hops (instead of Columbus) this year, says Tara Goulet, Birdsong Brewing head of sales. It will be the same Fake Plastic Trees fans know and love, she said but will have enhanced notes of citrus for a juicy, hazy, summer beer.

Fake Plastic Trees was a unique brew when it debuted five years ago, said Jenny Sassman, who works in sales and social media for Birdsong. “At the time, there weren’t many beers like it and now, people can’t get enough of hazy IPAs.”

The hazy IPA style — often referred to as New England-style IPA — has become tremendously popular in the past decade. Birdsong has been making beer that fits the criteria (unfiltered, flavorful, cloudy, juicy) since the beginning, and Fake Plastic Trees is no different. 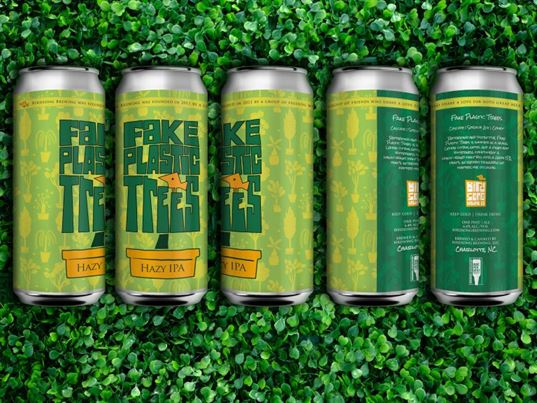 “In the heat of summer, light beers are great, but I like hops and want an IPA that won’t weigh me down,” said Birdsong Brewing tap room manager Jacqueline “JP” Parker. “Fake Plastic Trees is perfect for that because it’s refreshing and full of flavor, but won’t knock me out (especially if I’m outside).”

The balance between the malt and hops is key to Fake Plastic Trees, says Jeff Bowman, lead brewer. The recipe was tweaked slightly this year with the addition of a hefty dry hop and the substitution of Comet hops for Columbus. “Both [the malt bill and hop bill] are strong, but they compliment each other. 6.4% is a nice ABV range, and this beer packs a lot of citrus flavor while offering a smooth mouthfeel.”

Seasonality and local sourcing is always top of mind for Birdsong, and this year’s release of Fake Plastic Trees is no different, using wheat from nearby Riverbend Malt House in Asheville.

So what about that beer name? Never known to take themselves too seriously, Birdsong drew inspiration from the Radiohead song of the same name. Head brewer Conor Robinson and Birdsong principal owner Chris Goulet engaged in some off-key carpool karaoke on a road trip from Colorado, and a seasonal favorite was born.

Founded in 2011 from humble roots, Birdsong Brewing Co. has grown to become the Charlotte destination for culinary-inspired, fresh, unfiltered, American-style ale. Using locally sourced ingredients and fully embracing musical (and often whimsical) inspiration, Birdsong celebrates creativity with a new, weekly small batch release in the taproom every “Thursty Thursday.” Beloved by locals and sought after by fans across the Carolinas, the 30-barrel brewhouse and taproom in the Belmont neighborhood embodies the #CanDoWillDo philosophy behind what Birdsong brews, thinks and believes. Charlotte’s third oldest brewery is the first in the Queen City to embrace solar power, installing a 75-kilowatt array for the roof of the brewery in 2018. For more information, visit birdsongbrewing.com.