BTN interviews one of Argentina's most respected and experienced winemakers.
Favorite 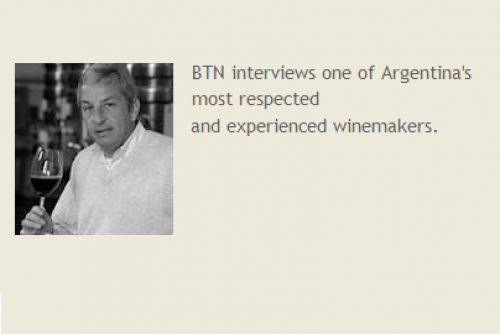 Winemaker Roberto de la Mota, 46, has been working full-time in Argentina's wineries and vineyards since he was 19 years old. One of Argentina's most respected and experienced winemakers - with a nearly century-old Argentine family, whose sole objective is to produce wine of unquestionable, superior quality wines.

It is 1500km of viticultural areas stretching from the North to the South with different terroirs producing not only great and world renowned Malbec but also Cabernet Sauvignon, Bonarda, Merlot, Torrontes among other varieties.

During the 2012 Argentina Wine Awards, the diversity, value and quality of Argentinean Wines were demonstrated. International Jurors awarded 3 of 19 trophies to Cabernet Sauvignon and 2 to Syrah. Chardonnay, Bonarda and Sauvignon Blanc received the highest awards.

A list of 14 Argentinean Wines retailing for less than U$S20 were featured in one of Wine Spectator's editions and most of the journalists affirmed that “the country has potential to offer value and diversity besides Malbec”.

Argentina has a wine growing area of over 210,000 hectares distributed amongst 25,180 vineyards. Grapes are grown in 13 of the 24 provinces of the country; however, only in 7 of them is viticulture economically meaningful: Salta, Catamarca, La Rioja, San Juan, Mendoza, Neuquén and Río Negro.

But besides Malbec a range of other grape stock varieties are being rediscovered and improved. Others, now in experimental process, are promising “pearls” for the coming years. Bonarda is the second most planted variety and its wines have florals hints, fruit and character, they are also are vibrant without complexity.

Cabernet Sauvignon from Argentina has a diversity of aromatics profiles because of the mild temperature, high altitudes and suitable soils. In general Cabernets from Argentina have unmatched concentration and maturity because of its smoothness.
White wines are also becoming recognized world wide. For example, Torrontes grape produces aromatic, expressive wines, with good acidity, citric and mineral hints.

BTN interviewed Roberto de la Mota, winemaker and partner of Mendel Wines, and we asked him about other varieties besides Malbec that Argentina produces.

“Malbec has become synonymous with Argentina because it is a variety that is well adapted to our terroir. It produces wines with distinctive characteristics because of its fruit and intensity. It is recognized easily, is full bodied, elegant and easy to drink. These characteristics help in the development of our Malbec”. He says that Malbec acted as a “spearhead” in making Argentina well known all over the world as a high quality wine producer.

But he adds that there is still a lot to do. Roberto de la Mota mentions that although Argentina is a great producer of the Malbec grape, they also produce other varieties such as Cabernet Sauvignon, Bonarda, Pinot Noir, Tannat and Torrontes among others.

“Depending on the terroir we can produce red grapes with singular characteristics, like Cabernet Sauvignon. It grows really well in high altitudes and stone soils, and produces intense and fruity wines with a lot of typicity. The problem Cabernet has is that it has to compete with other Cabernets of the world”.

We also asked Roberto about the “Bonarda boom”, and he expressed that “Bonarda represents Argentina really well. The wines produced by this variety are not as elegant as Malbec but it does produce some really interesting wines”.

During the first four months of 2012, USD 1.37 million worth of Bonarda bottled wine were exported, at an average price of 9-liter to USD 37.93. In this sense we can see growth, because 2011 ended with an average price of USD 34.23. The largest markets for these wines are the United States, Brazil, Sweden, United Kingdom and Canada.

Every day winemakers and people related to wine are concerned with finding wines with distinctive characteristics. We know that many countries produce a variety of  wines and the world of wine is getting more and more competitive by the day.

Roberto de la Mota mentioned other varieties with interesting developments in Argentina like Tannat in Cafayate. If we talk about white grapes, Argentina has great Torrontes grapes, Chenin Blanc and Semillon. "Our vineyards are old and located in perfect areas. Today, most of these varieties are used to produce Sparkling Wines”.

On the question of whether the US market is Malbec saturated, he says that “ we can grow in the US market not only with Malbec but also with other varieties. That market is still important for us and they admire how Argentinean wineries keep on working in order to improve”. However, there are other important markets: Canada, Brazil (the most important), Peru, Colombia, México in Latin America that are growing increasingly.

This interesting conversation with the “Argentina Wine Star” ended with the promise of another chat in the future about this fascinating world of wine. 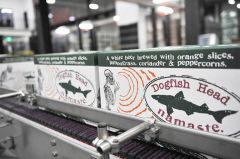 Taking Your Craft Brewery to the Next Level: Interview with the VP of Sales at Dogfish Head Brewery, Adam Lambert.

Through examples of companies and brands that have had successful product launches in the U.S., John Beaudette, President of MHW, outlines 10 tips for a successful brand launch.
Read More 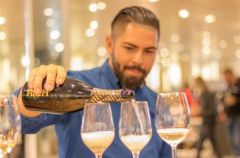 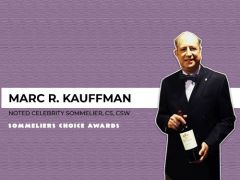 "The awards are a good guide to what many sommeliers think will sell. That's the main point, the saleability of the wine." - Marc R. Kauffman
Read More

Getting Your Wine Into Shanghai

Never has a question seemed so deceptively simple: what is the process for getting your wine into Shanghai? The first step is undoubtedly to spend longer than you would in other markets finding an importer.
Read More