North Portland’s Ecliptic Brewing is celebrating their 7th anniversary with the release of Seventh Orbit: Raspberry Golden Ale with Chocolate on October 16th. It’s part of two weekends of small celebrations on October 16-18th, and 22-25th.

“It’s been a wild year, but here we are celebrating another anniversary. I’m really thankful for that.” says Ecliptic founder and brewmaster John Harris. “Raspberry was the first fruit I ever brewed with, and this is only the second raspberry beer to be brewed here at Ecliptic,” says John.

Brewed with real raspberries and a touch of chocolate, this golden ale gets an extra flavor punch from complementing berry-forward Enigma and Ariana hops. “Who doesn’t like raspberry on desserts?! This beer has a nice malt base, lots of lively hops from dry hopping, and a balanced raspberry character,” says Harris.

Seventh Orbit: Raspberry Golden Ale with Chocolate will first be released in Ecliptic’s restaurant on October 16th in 16-ounce cans and draft. It will soon follow throughout Ecliptic’s distribution network. 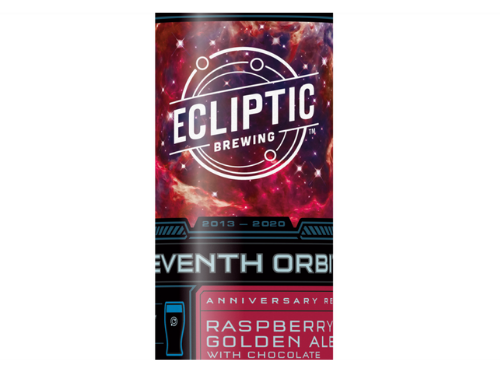